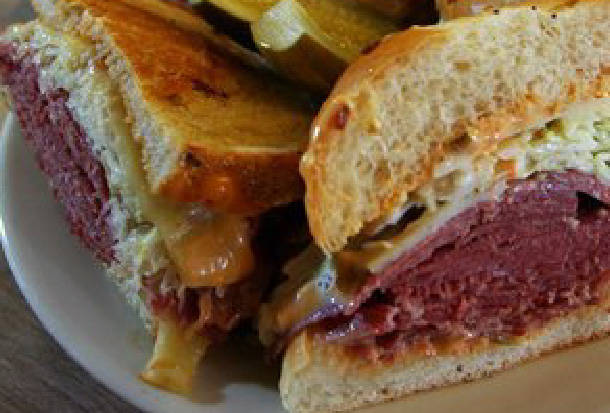 A corned beef sandwich, when properly done, should be a meal that intimidates. It’s a tall stack of salty beef slices on freshly baked bread and certain kinds of condiments, particularly golden mustard.

Now, don’t get crazy and mix up the classic corned beef sandwich with its cousin, the Reuben – that one may use corned beef, but it confuses the situation with adding Swiss cheese, sauerkraut and some kind of dressing, typically Thousand Island or Russian dressing. Yes, that’s a great sandwich. But it’s not the kind of simplicity that comes with a traditional corned beef on rye.

But there’s no secret to a great corned beef – it’s easy to make and wonderful to eat, according to local chefs who specialize in this juicy cut.

“I do absolutely nothing but cook the brisket in the pot with boiling water until it’s done,” said Stuart Litt, owner of Detroit’s Hygrade Deli, which is known for its flavorful corned beef. “It is a top-notch product, but all I do is take it out and put maybe four or five in a big pot, let it boil for five hours and then it’s done.”

You can dress up a corned beef sandwich so many ways, Litt says, but the traditional offering is the meat, mustard and bread. Make sure it is a good rye, something made with rye flour and baked to perfection – that means a crispy crust and a soft inside. Then you have the mustard. Go with plain yellow for the spicy moisture it brings. Then, top it with as much corned beef as you can stand. Go at least one to two inches high.

Throw a pickle on the side and you’ve got a bite of pure goodness. It is pungent. It is going to get crumbs all over you. You may feel a bit overwhelmed by the salt and have to drink two or three glasses of water after lunch or dinner. But you’ll be full for hours and satisfied for days.

Corned beef grew in fame and taste in the United States in part because of immigration. Irish immigrants came to New York, Boston, and Detroit, looking for a better life away from political persecution and famine. Detroit, in particular, had a wealth of Irish residents, creating the Corktown neighborhood and some mighty fine eats along the way. Its strong Jewish population, first in Detroit and then in the suburbs, also plays a role in the two distinct flavors and preparations of Detroit corned beef.

Here are some places to try if you’re craving a corned beef sandwich:

This St. Clair Shores deli is known for its small size but huge portions. It uses corned beef in a number of sandwiches, so you may want to check out the menu before you go. But the one to try is on the “nieces and nephews” menu – the No. 1 sandwich known as “The Lynne.” This delight between two slices of bread has corned beef and swiss cheese. Easy and delicious.

Any restaurant that brags it brings you the “BIGGEST AND BEST corned beef…period!” definitely gets the right kind of attention. This deli and its recipes go back to old-school Detroit when there were synagogues and delis all over town. Bread Basket makes juicy corned beef for its famous Quarter Pound Stacker sandwiches as well as what it calls the Corned Beef roll – a deep-fried egg-roll that holds a small bit of salted corned beef. And, yes, it is everything you think it will be as a perfect meaty snack.

Detroiters call this joint a secret, but anyone who cruises down Michigan Avenue has stopped here for a great breakfast for a hearty sandwich. The décor is spare; the atmosphere simple. But the food is well prepared and served with a smile from everyone who works behind the counter. Its famous corned beef is worth a shot on Instagram and will sit well in your stomach for its savory spiciness. Try it on an onion roll – you can thank us later.

Head to the Nautical Mile in the tourist part of St. Clair Shores and you’ll find this tight ship of a deli. The sandwiches here are filled with meat and toppings on fresh bread, making them worth eating over and over. The basic corned beef sandwich, known as “the Georgia”, comes with swiss and is served on grilled rye. It also comes with a pickle and a bag of chips, but the sandwich itself is so big you’ll likely have to save those for later.

This Corktown mainstay has put its amazing corned beef in a variety of sandwiches on its impressive menu. One that is worth trying is a rarity – a “giant spectacle of a sandwich,” according to those in the know. The F’getaboutit has two pounds (yes, you read that right) of Sy Ginsberg corned beef topped with swiss cheese, choice of coleslaw or sauerkraut and Dearborn yellow mustard or Thousand Island dressing on a two-pound loaf of sourdough rye.